Michio Kaku opened the second day of DevLearn with a keynote on the future of the mind. He portrayed extrapolations of current research to some speculative ideas of what our future could mean. He talked about research from physics (?!?) on MRI, AI, and more to provide new capabilities. 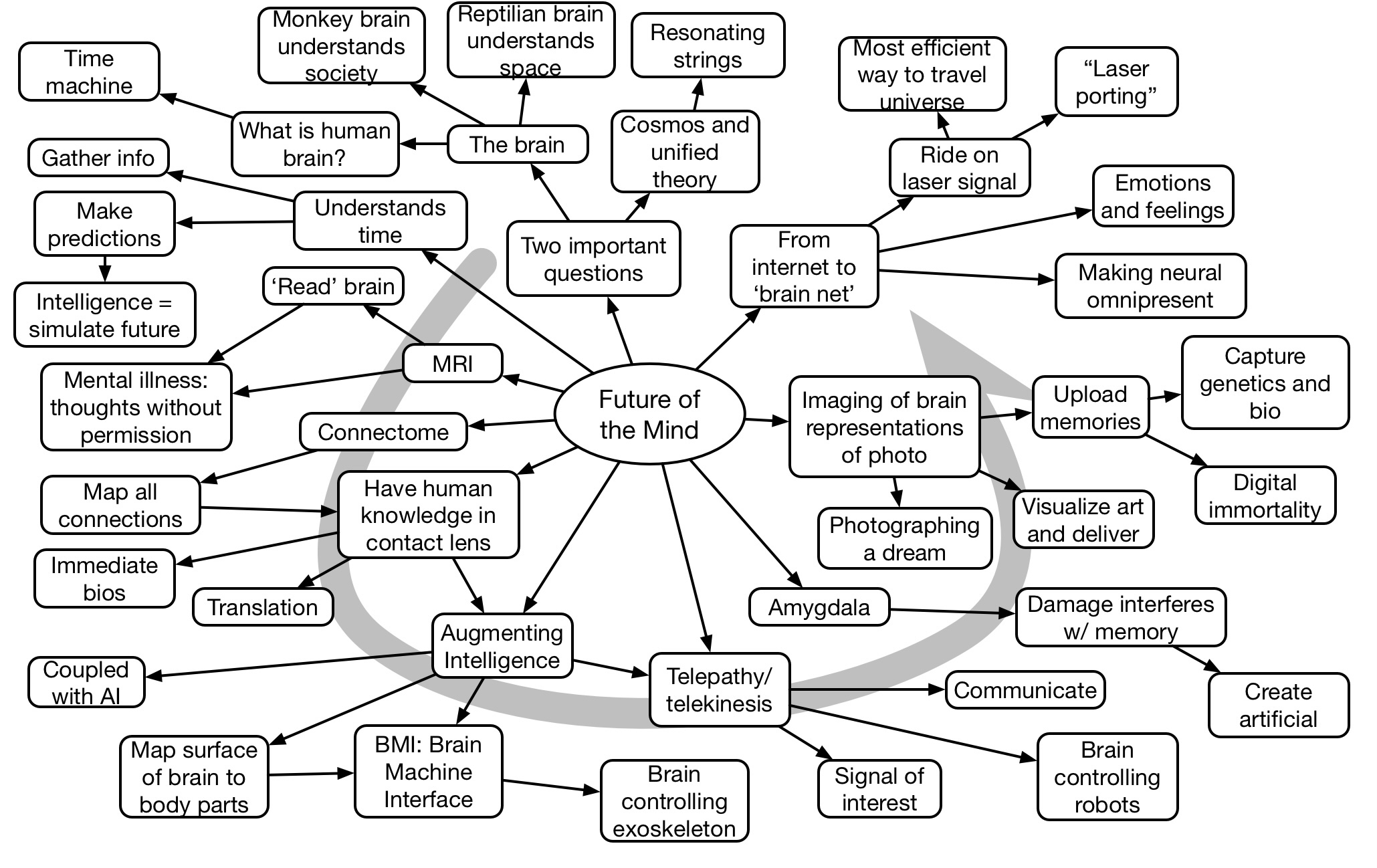 Kevin Bethune kicked off the 2022 DevLearn conference with a personal story about getting to delivering strategic innovation. Talking about interdisciplinary work that has an impact, he ended up laying out factors in leadership to support innovation. (Apologies, I had to take a brief break, so I missed a small bit. Sorry.) 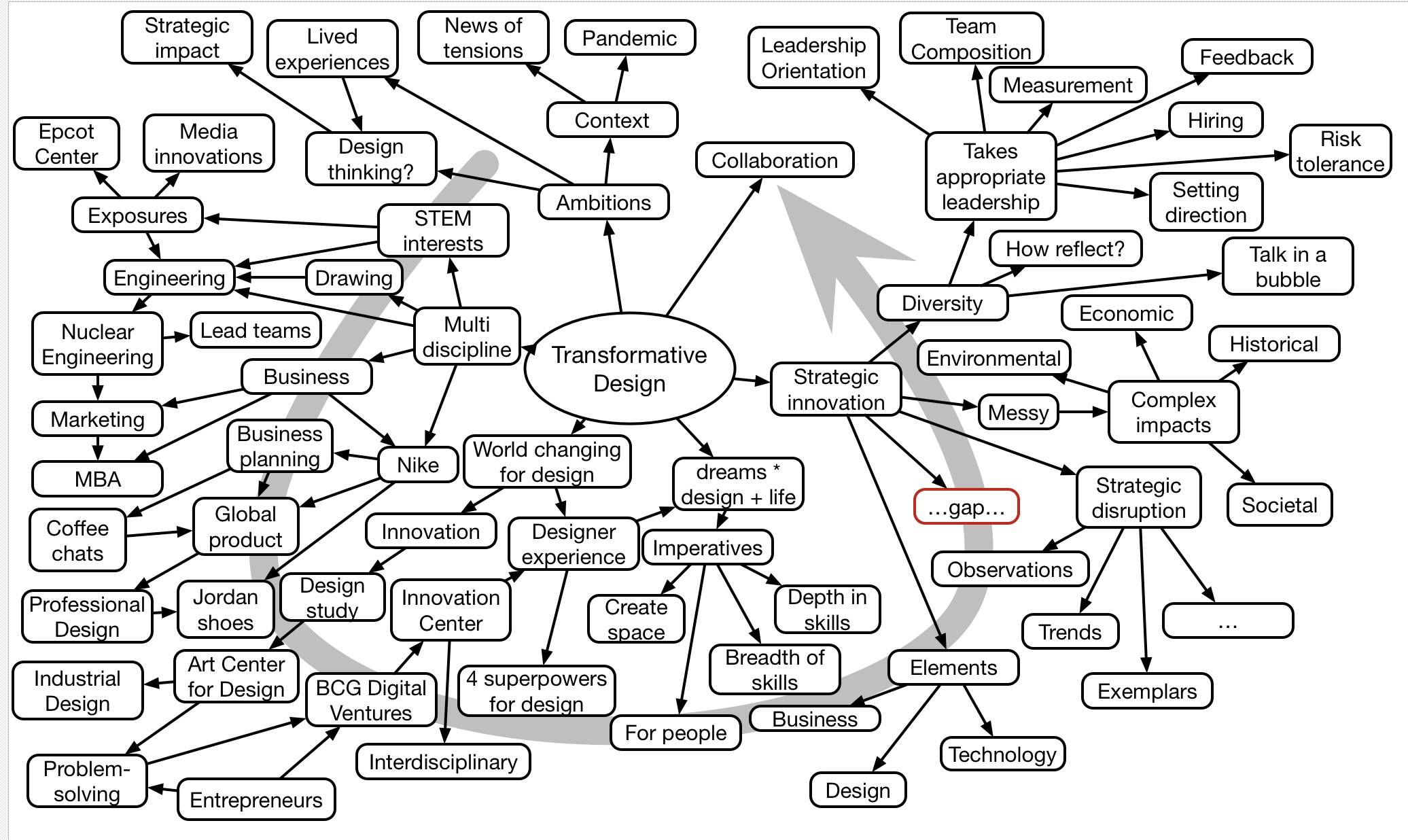 Once again, someone notified me of something they wanted me to look at. In this case, a suite of concept maps, with a claim that this could be the future of education. And while I’m a fan of concept maps, I was suspicious of the claim, So, while I’ve written on mindmaps before, it’s time to dig into concept maps and learning.

To start, the main separation between mindmaps and concept maps is labels. Specifically, concept maps have labels that indicate the meaning of  connections between concepts. At least, that’s my distinction. So while I’ve done (a lot of) mindmaps of keynotes, they’re mostly of use to those who also saw the same presentation. Otherwise, the terms and connections don’t necessarily make sense. (Which doesn’t mean a suite of connections can’t be valuable, c.f. Jerry’s Brain, where Jerry Michalski has been tracking his explorations for over two decades!) However, a concept map does a better job of indicating the total knowledge representation.

I know a wee bit about this, because while writing up my dissertation, I had a part-time job working with Professor  Kathy Fisher and SemNet. Kathy Fisher is a biologist and teacher who worked with Joe Novak (who can be considered the originator of concept mapping). SemNet is a Macintosh concept mapping tool (Semantic Network) that Kathy created and used in teaching biology. It allows students to represent their understanding, which instructors can use to diagnose misconceptions.

I also later volunteered for a while with the K-Web project. This was a project with James Burke (of Connections fame) creating maps of the interesting historical linkages his show and books documented. Here again, navigating linkages can be used for educational purposes.

With this background, I looked at this project. The underlying notion is to create a comprehensive suite of multimedia mindmaps of history and the humanities. This, to me, isn’t a bad thing! It provides a navigable knowledge resource that could be a valuable adjunct to teaching. Students can be given tasks to find the relationships between two things, or asked to extend the concept maps, or… Several things, however, are curious at least.

The project claims to be a key to the future of global education. However, as an educational innovation, the intended pedagogical design is worrisome. The approach claims that “They have complete freedom to focus on and develop whichever interests capture their fancy.” and “…the class is exposed to a large range of topics that together provide a comprehensive and lively view of the subject…”  This is problematic for two reasons. First, there appears to be no guarantee that this indeed will provide comprehensive coverage. It’s possible, but not likely.

As a personal example, when I was in high school, our school district decided that the American Civil War would be taught as modules. Teachers chose to offer whatever facets they wanted, and students could take any two modules they wanted. Let me assure you that my knowledge of the Civil War did not include a systematic view of the causes, occurrences, and outcomes, even in ideologically distorted versions. Anything I now know about the Civil War comes from my own curiosity.

Even with the social sharing, a valuable component, there appears to be no guidance to ensure that all topics are covered. Fun, yes. Curricularly thorough, no.

Second, presenting on content doesn’t necessarily mean you’ve truly comprehended it. As my late friend, historian Joseph Cotter, once told me, history isn’t about learning facts, it’s about learning to think like a historian. You may need the cultural literacy first, but then you need to be able to use those elements to make comparisons, criticisms, and more.  Students should be able to  think with these facts.

Another concerning issue in the presentation about this initiative is this claim: “reading long passages of text no longer works very well for the present generation of learners. More than ever, learners are visual learner [sic].” This confounds two myths, the digital native myth with the learning styles myth. Both have been investigated and found to be lacking in empirical support. No one likes to read long passages of text without some intrinsic interest (but we can do that).

In short, while I laud the collection, the surrounding discussion is flawed. Once again, there’s a lack of awareness of learning science being applied. While that’s understandable, it’s not sufficient.  My $0.05.

Kate O’Neill closed the DevLearn conference with a keynote on tech humanism. With a humorous but insightful presentation, she inspired us to strive for good. 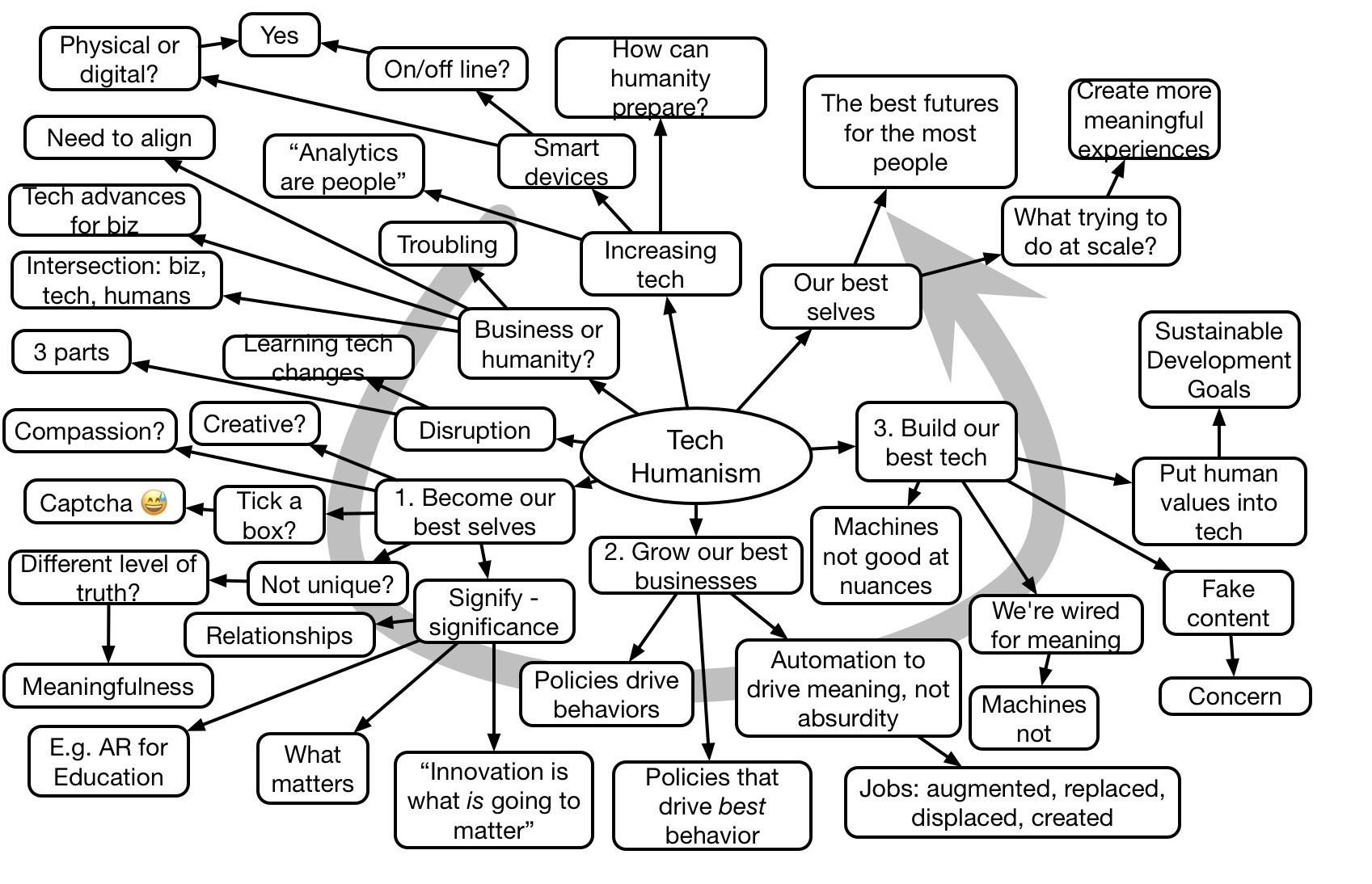 Helen Papagiannis kicked off the second day of the DevLearn conference. She explored the possibilities of AR with exceptional examples. She went through a variety of concepts, helping us comprehend new opportunities. Exposing the invisible and annotating the world were familiar, but collaborative editing of spatial representations resurrected one of the most interesting (and untapped) potentials of virtual worlds. 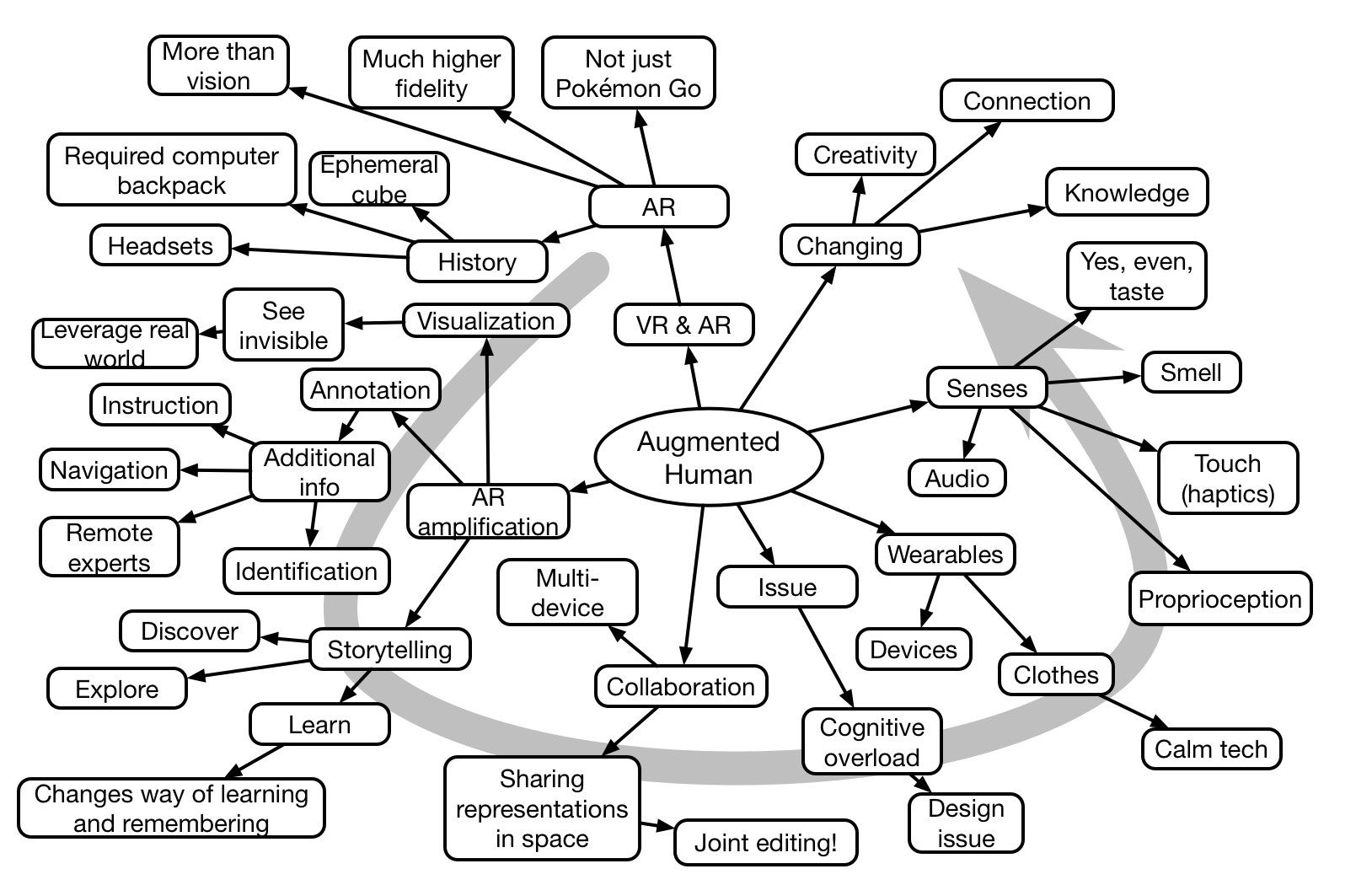 Talithia Williams presented the afternoon keynote on the opening day of DevLearn. She gave an overview of the possibilities of data, and the basics of data science. She then made some inferences to learning. 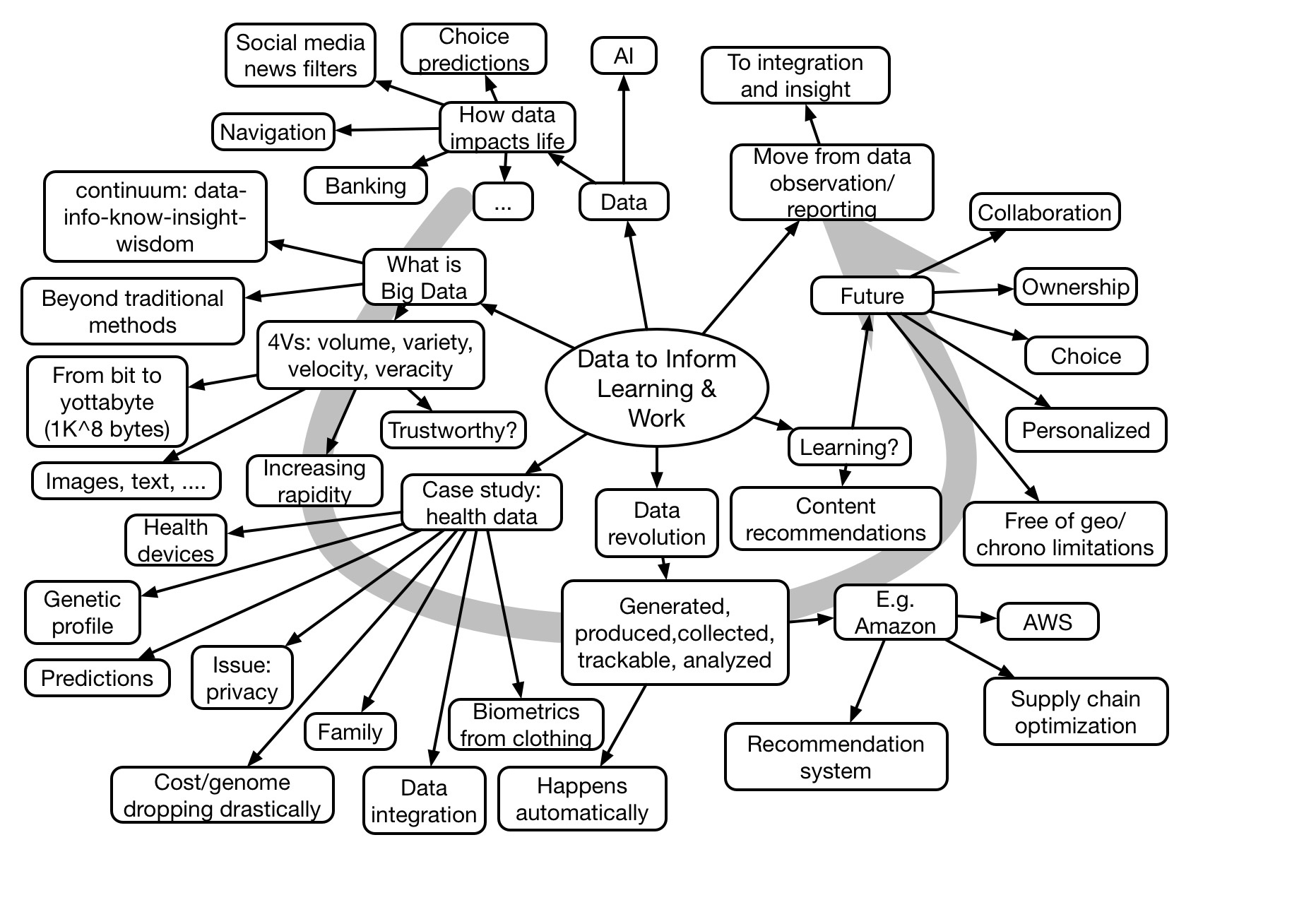 DevLearn opened with a keynote from Sophia the Robot. With an initially scripted presentation, and some scripted questions from host David Kelly, Sophia addresses the differences between AI and robots, with a bit of wit. The tech used to make the illusion was explored, but the technology was put to the test with some unscripted questions, and the responses were pretty good. An interesting start! 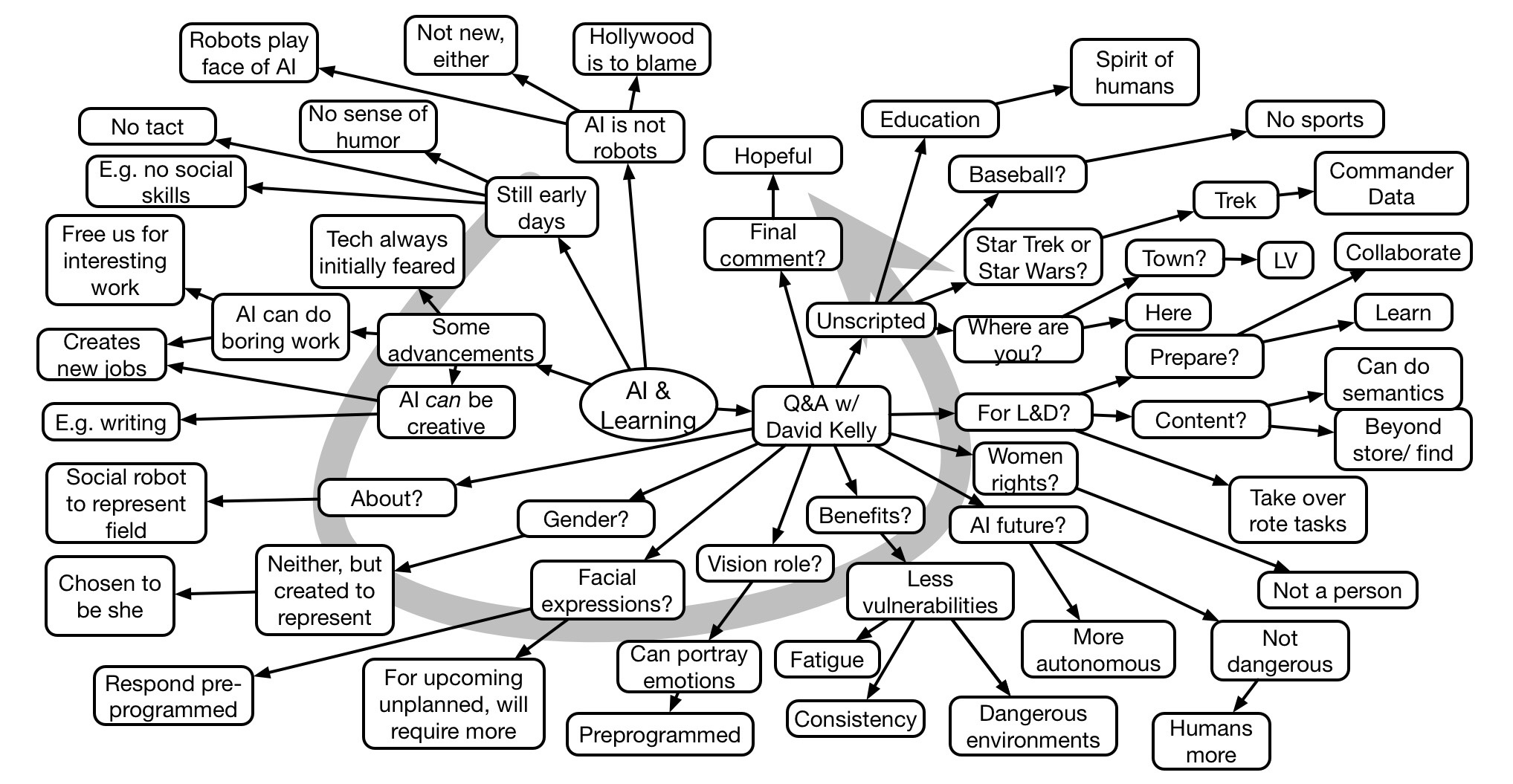